Let’s be honest here: some Christmas holiday “traditions” get a bit old after awhile. The opening presents at the crack of dawn on Christmas morning. The shopping – oh, the endless shopping! – from October until December 24 just to get the “perfect” gift.  The fruitcake, the eggnog, the candy canes, the chocolate (well, the chocolate we like), and on, and on, and on.

You understand what we mean: the too-much Muchness that is Christmas in the U.S. today!

The holidays in Mexico are different. They’re more in tune with what the holidays are supposed to be about: being grateful for what we have been given, spending time with family and friends, presenting gifts to children more than to adults.

So take a look below at traditional Christmas traditions in Mexico and see if you could incorporate one or more into your own celebrations this year.

Christmas traditionally is celebrated in Mexico between December 12 and January 6. December 16 is the start of the traditional Posada processions performed by children, during which they carry candles and a board that has clay figures on it of Mary and Joseph looking for a place to stay for the night.

The children go to neighbors’ homes and sing a song about the couple’s search for lodging. Each house tells those in the procession that there is no room at the house, until the last house welcomes them in. The children then say a prayer or more of thanks and a party commences with games, food and possibly fireworks. Many post-Posada parties also see the children hitting a piñata filled with candy. 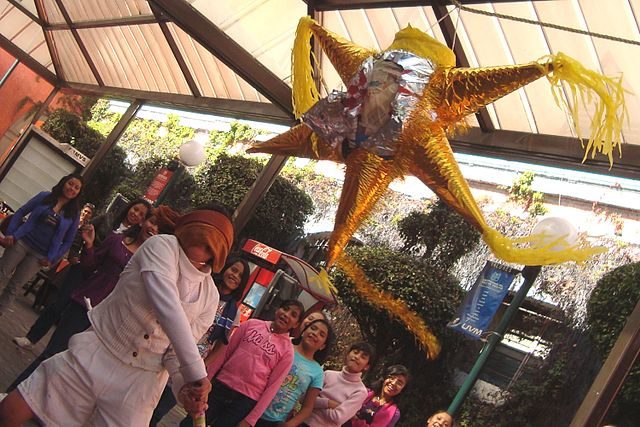 Swinging at the piñata.

A different house hosts the party each night until Christmas Eve, when the children place a manger and shepherd figures on their boards and then place a baby Jesus into the manger when they reach the final house and are welcomed in.

Everyone then heads for a midnight Church service and celebrates afterwards with fireworks to mark the start of Christmas.

Christmas Eve (also known as Noche Buena) is a day for family. Many families take part in the last Posada and then have their main Christmas supper, which usually consists of rice, tamales, chiles rellenos, roast pig or turkey, menudo, as well as cider or hot fruit punches.

Christmas decorations in Mexico include poinsettias in the home and evergreens decorating the home’s front door.

Unlike in the U.S., children in Mexico don’t open their gifts until the Epiphany, January 6.

All Mattito’s locations will be closed Christmas Day, but we’re open regular hours on Christmas Eve. We look forward to serving you!

Image courtesy of Yavidaxiu via Wikimedia.com and Creative Commons License 3.0.