If you are a vegan and avoid any type of meat, that doesn’t mean you have to give up great Tex-Mex cooking. Tex-Mex features a wide variety of vegetables as well, enough to satisfy even the most particular of vegans. As an example, here are two recipes for vegan tacos. 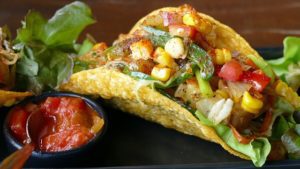 This one is from bonappetit.com

You will need the following:

Heat the oil in a large non-stick skillet over medium heat. Add the sliced onion and jalapeno. Sauté them until they are tender, which will take about 10 minutes. Then, add in the soy chorizo and cook it until it begins to brown. Stir it often. This will take about five minutes.
At the same time, cook the beans in a small, heavy saucepan over a low heat until they are hot, stirring occasionally.
Stack two of the tortillas together for one taco. Spread about two tablespoons of beans over each of the tortilla stacks. Then add some of the soy chorizo on top. Sprinkle on some diced onion and cilantro. This recipe makes six servings.
The second vegan taco recipe is from Bustle.com. These are mango habanero black bean tacos. This recipe is at LoveAndLemons.com.

Here’s what you need:

One mango, diced
One-quarter cup of diced red onion
One diced red padrone pepper
The juice of one lime
A splash of olive oil
A handful of cilantro, chopped
Three-fourths cup of cooked black beans, drained and rinsed
One avocado, diced
A teaspoon of mango-habanero jam
Salt to taste
Four to six flour tortillas
Optional: crumbled cotija cheese
Optional: Greek yogurt with lime and salt.
Here’s how you make them.

Stir together in a bowl the diced mango, red onion, red pepper, lime juice, olive oil, chopped cilantro, avocado, black beans and one teaspoon of the mango-habanero jam. Add a few pinches of salt. Chill the mixture until you are ready to use it.
Warm the tortillas and fill them with the mixture. If you want, you can top them with the cotija cheese and the Greek yogurt.
If you don’t have the mango-habanero jam, you can make this recipe without it. You can also replace the jam with chipotle spices or roasted jalapenos or habanero peppers.
Eating Tex-Mex in restaurants lends itself well to veganism. If you eat vegan, let your waiter know and we can make up some all-vegetable dishes for you. Visit a Mattito’s location near you soon.