Tacos have become so popular they now rival the hamburger as one of America’s most popular food staples. That’s right, more and more Americans are trading in their buns for shells and getting their protein fix south of the border style.

So how did this small meal of beef, beans, chicken, or fish, topped with shredded cheese, lettuce and tomato, spooned between the opening of a curved, crunchy, corn tortilla come become such a food fixture in the American landscape?

Well, it’s actually a long story. But for you, we’ll condense it. Here’s the short version of how the taco migrated to the U.S. and into our hearts and stomachs. 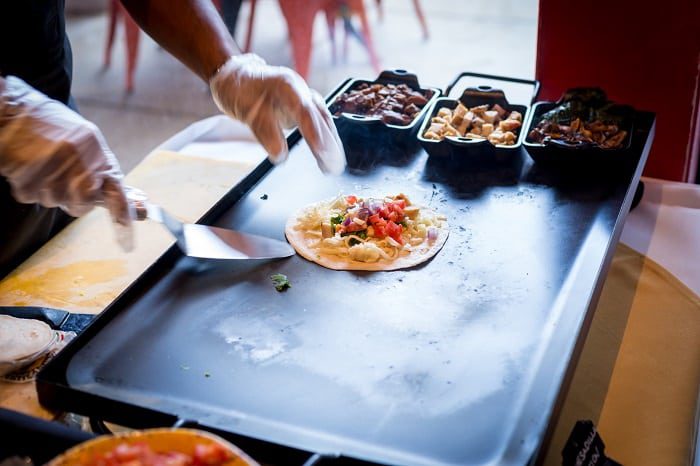 Back in 2012, Smithsonian magazine wrote that the taco first crossed the US border after crawling out of the silver mines of Mexico. In fact, those same miners “likely” invented it, according to the magazine. “Taco” was actually the word miners in the 18th century used to describe the small charges they used to evacuate ore (hence the belief that miners created a dish they called a taco).

Fast forward to the 19th century and you’ll find the taco’s first appearance in print. One popular 1800s dictionary described the dishes as tacos de minero (or miner’s tacos) – a clear link to their underground origins.

Tacos apparently initially made their home in working class neighborhoods where cash strapped communities used them to feed their families with limited financial resources.

But their journey didn’t end there.

Soon after their popularity expanded to the U.S. By the late 1800s and early 1900s Mexican migrants made their way north working in mines and on railroads, carrying the taco in tow. It wasn’t long before these tasty stowaways had their first public profile. Sources cite the taco’s first mention in a U.S. newspaper in early 1905.

For some time after, the taco continues to be seen as a food for the lower classes, and in some regions it retains its designation as peasant food for several decades. Fortunately, the stigma didn’t last long. As the children and grandchildren of the original Mexican immigrants start to rise economically, “street food” rises in esteem a bit, too. Though it’s a slow start at first, these initial turning tides were an important stepping stone.

The swell continued as descendants of Mexican immigrants began using American ingredients in their dishes, such as beef instead of offal, for example.

Of course, no history lesson about the Taco’s expansion into the Americas would be complete without a mention of Glen Bell (of Taco Bell fame).

Many people incorrectly believe that Glen Bell, founder of Taco Bell, “invented” the u-shaped, crispy taco shell taco we all know and love. In fact, Bell himself believed so, too. But, the article clearly states that references to the u-shape, hard shelled taco had been documented a full 10 years before.

Bell ever opened his first restaurant. What’s more, according to the Smithsonian, his contribution to the rise of the taco in America was simply to make Mexican food “ok” for non-Mexicans to eat. He also strategically made the tacos in advance of anyone ordering them, thus making the process of feeding many people go much more quickly. (Yep, you guessed it, hence tacos foray into “fast” food).

As Taco Bell grew in popularity among Americans of non-Mexican heritage, so did the taco.

And that, in a nut (corn taco) shell, is a very short history of the taco in America.

Love tacos? We have them here at Mattito’s! Visit a Mattito’s location near you for some of the best tacos available throughout the greater Dallas region.